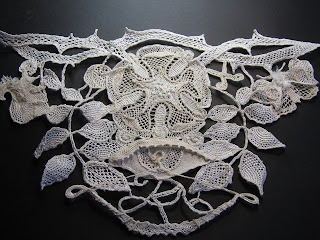 Many years ago when my great grandmother was still alive she told me of how she had gone over to Belgium just after WW1 to see my great grandfather who was working in a field hospital there. She told me how 'the ladies' had made her a piece of lace and the movement she made with her hand as she told me suggests to me that she meant a piece of needlelace.
She was, by then, over one hundred years old and though still living at home it was mainly in one room. At the memory of this story she got up and went into her bedroom now long abandoned, a memory room quiet and almost sanctified in its stillness. The suite of furniture was Edwardian with an ancient bakelite light switch hanging over the bed, now covered over with a dust sheet. At the dressing table she rummaged in the drawers, full of long unused items,toiletries and clothing. She was looking for the lace.
One hundred years after her trip I, a needlelace maker, have been working with vascular surgeons. The work was initiated because of the historical connection with Alexis Carrel, a Belgian surgeon and creator of the vascular anastomosis ,who learnt stitching from his mother and other embroiderers and lace makers during the late 19th and early 20th centuries.
We never found her piece of lace but I found it's effect on the world. 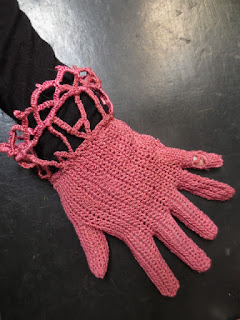 What do we mean by 'wrong'? Creative people, craftspeople, curators and conservators all have a particular understanding of wrongness. They also have a language to express it which is both enlightening and useful.
I had noticed though that to extract this language it was necessary for them all to have their tools or materials in hand before you got to the really interesting stuff. After several good chats with surgeons I realised that the same was true of them. This led me to thinking about what would happen if I got them together with those mentioned above and see what would happen. Would they agree? Would they speak the same language or would their criteria be too different? 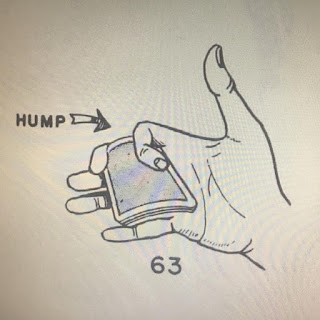 On November 15th 2019 I did just this. It wasn't the first time that some of them had met but now I wanted to really get deep into their expertise.  I wanted to know how they judged wrongness; was it context? was it colour based? was it a combination of their senses....a mix of sight and touch? I wanted their 'word hoards'. I wanted to see if  we could share this language with others both to express why creativity is important to all and to help others communicate 'what's wrong'.
The group comprised of surgeons, artists,craftspeople, musicians,historians, a conservator, a masseur and a magician.

We tried out each others skills,we discussed colour and texture, 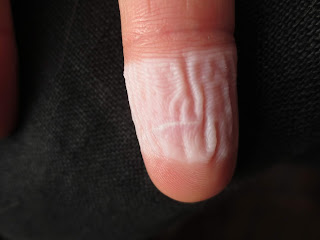 we examined strange packages in object based discussion, 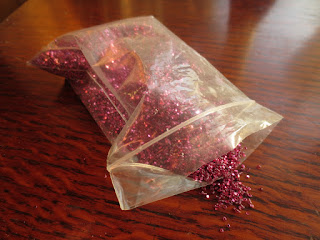 we considered the value of old materials, 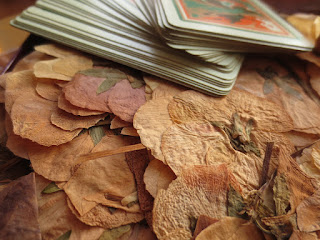 we looked at reactions to synthetic and unfamilar objects, 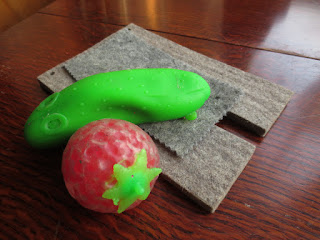 we discussed empathy with the organic and the inorganic, 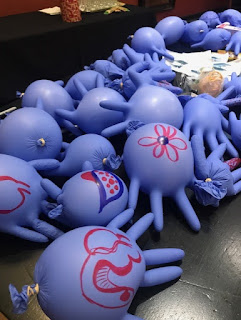 and we filmed it all......(watch this space) but in the meantime you can binge watch on catch up....

2014 Thread Management
and
2016 Thinking With Your Hands 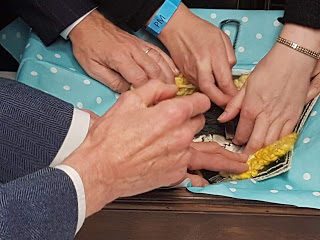 This week Prof. Roger Kneebone and I were featured on BBC Radio Four's programme 'The Touch Test'

talking about the Textile Body and about touch in surgery.

(To listen you may have to sign into the BBC's i-player service). 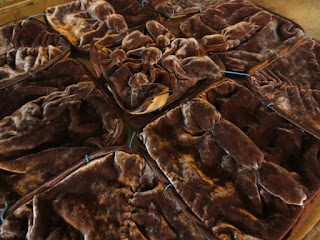 Scarring is a problem for skin and fabric, once cut or traumatised it will never be the same. Some heal very well, almost invisibly, some do not. As a prompt to discuss what we know about someone before we operate on them I made this small velvet quilt for the Textile Body. Following its format of nine squares I took my inspiration from 18th century.whole-cloth quilts and used silk velvet to illustrate the problem. It is a material that is both beautiful and easily damaged. 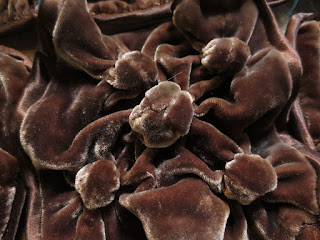 Scars on the skin take many forms but keloid, hypertrophic and contracture scars are particularly problematic. In appearance they can be highly raised from the original site of damage or incision, dense and overgrown or having the appearance of pulling the skin surface in multiple directions. 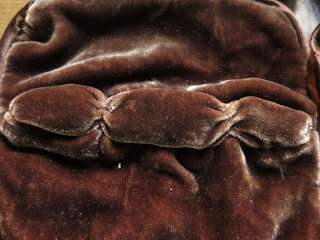 Used in conjunction with another layer that looks at fragility in ageing skin it can be used to explore different aspects of touch and how we understand 'wrongness'. It has already been used to engage young adults interested in going into medicine at a yearly event at the Wellcome collection as part of the Saturday Studio programme. 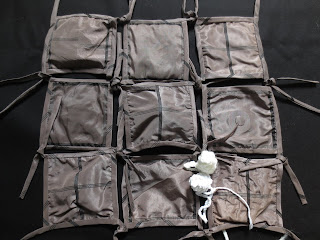 Quite simply I was asked to do a cancer layer for the Textile Body. The format therefore would follow the grid of nine textile squares which could sit on top or amongst the other layers in the 'Body'.I worked with surgeons who deal specifically with cancers and was given access to theatre and to tumours that had been removed.
However it was not beyond my imagination to know what was was wrong when it came to a piece of silk so I chose this piece of tabby coloured antique silk. It is very high quality with a very smooth surface and in some places the silk is discoloured. This was my queue for the first signs that something is wrong underneath. Snags, puckers and adhesions are not desirable in silk and  not in humans either. On the reverse of each square is a pocket in silk mousseline, the finest silk available.It is both very sheer and delicate. Inside each pocket I placed an object which was uncomfortable in colour, texture and usually juxtaposition thus being contextually 'wrong' too. They could all be felt through the silk. 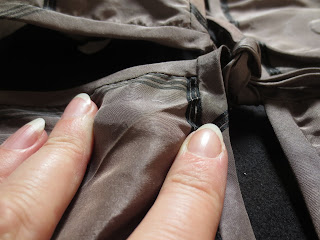 Mostly it was hard to guess what they were before seeing them but when medically examined the diagnoses were largely the same. ''Unnatural mass'' and ''this is the sort of thing where you have to control the expression on your face'' were two early comments. 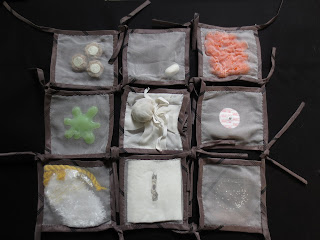 One though was designed to be unseen, a gist (gastro-intestinal-stromal-tumour). I had been allowed to examine one after surgery, it was like a malevolent brain with its' own blood vessels and a texture of cauliflower and dense goo all in a membrane. They can remain benign unless ruptured so I imagined the monster lurking within and recreated it. 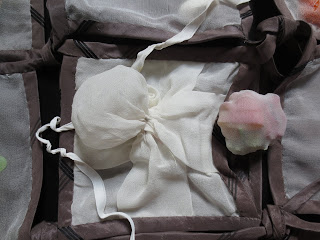 Two rubber finger monsters and a plastic flower did the job, all compressed into a silk pouch and secreted between two layers of pleated silk pocket. It can be removed by untying a white ribbon and carefully sliding it out from the pleats.
Many thanks to surgeons Chris Peters, Tamzin Cuming, Sam Gallivan and Roger Kneebone  for their advice on this piece. It has already been used to engage young adults interested in going into medicine at a yearly event at the Wellcome collection as part of the Saturday Studio programme.

Fleur short clip 2 from Paul William Craddock on Vimeo .   Above is a small clip of me stitching a cigarette paper. Why? Apparently the... 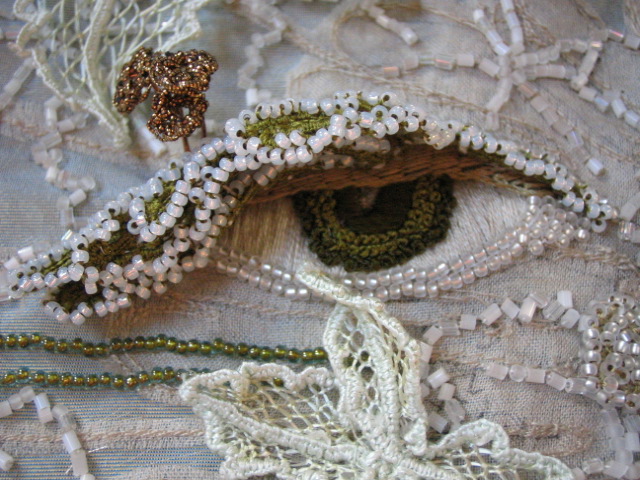 the glass pingle
I work in an artist community in north london where I look out over a semi woodland garden. My studio is my refuge from the world and is filled with books,old furniture,fabric and small treasures that have lost their way and come to me. I generally need three spotlights,a magnifying lens and biscuits to do my work which is getting very small. There is a museum in the cupboard for all the lost things called 'The Museum for Objects of Vertu' and is a haven of quiet within a haven.